What are the activities at Whistler Blackcomb ?

Why choose a trail at Whistler Blackcomb?

Whistler Blackcomb (TSX: WB) is a major ski resort located 121 km (75 mi) north of Vancouver, in British Columbia, Canada. By many measures it is the largest ski resort in North America; it is 50% larger than its nearest competitor in terms of size, has the greatest uphill lift capacity, and until 2009, had the highest vertical skiable distance by a wide margin. Whistler Blackcomb also features the Peak 2 Peak Gondola for moving between Whistler and Blackcomb mountains at the top; Peak 2 Peak holds records for the highest and longest unsupported cable car span in the world. With all of this capacity, Whistler Blackcomb is also often the most-visited ski resort, often besting 2 million visitors a year. Whistler was originally conceived as part of a bid to win the 1968 Winter Olympics. Although they lost the bid, construction started anyway and the resort opened for the first time in January 1966. Blackcomb mountain, originally a separate entity, opened for business in December 1980. The two resorts underwent a period of intense rivalry through the 1980s and 90s, with constant upgrades and improvements that was unseen at other resorts. By the mid-1990s the area was repeatedly named the best resort in many skiing magazines. Intrawest, the BC real estate firm that developed Blackcomb, purchased Whistler and fully merged their operations in 2003. Whistler Blackcomb was the centrepiece of a renewed bid on the part of nearby Vancouver for the 2010 Winter Olympics, which they won in July 2003. Whistler Blackcomb hosted the alpine skiing events, including the men's and women's Olympic and Paralympic alpine skiing disciplines of downhill, Super-G, giant slalom, super combined and slalom. Over the next decade, Intrawest expanded by purchasing additional ski resorts across North America, before expanding into golf and other resorts as well. Whistler Village, widely recognized for its livable design, formed the basis of similar Tyrolian-inspired developments at their expanding series of resorts, as well as other resorts that hired Intrawest to build similar developments on their behalf. The company was purchased in 2006 and the resort is now mostly owned by Whistler Blackcomb Holdings and Nippon Cable.

If you're looking for a winter vacation that will get your heart pumping, look no further than Whistler Blackcomb in British Columbia. This world-famous ski resort offers visitors a range of downhill and cross-country skiing options, as well as plenty of other winter activities to keep you busy.

Cross-country skiing at Whistler Blackcomb is a unique experience. The resort is located in the Coast Mountains, so the terrain is varied and challenging. You can choose from a variety of trails that wind through forests, meadows, and past glaciers. What's more, the elevation here means that you can ski on trails with stunning views of the surrounding peaks and valleys.

If you're new to cross-country skiing, don't worry – there are plenty of beginner trails to choose from. And if you're looking for a challenge, there are plenty of advanced trails to test your skills. No matter what your level of experience, you're sure to find a trail that's perfect for you at Whistler Blackcomb.

What are the coordinates and address of Whistler Blackcomb?

Linda Jackson
Dear Vail Resorts! Thank you for buying the mountain. Kind of like electing Trump I think a whole new management team is needed the town is in crisis. Much like what the entrenched democrats did to Washington. They are criminal and corrupt. Replace them see how much you save and better the place is. I am writing daily to support this position. Please, everyone write and maybe the grunts who do the real work will get paid enough to survive without food banking all winter! Place makes $100 000 000 or so a year and they expect employees to go to food bank. God Bless Trump. I'm over this welfare state. You are growing the far right faster than any right leaning idiot could ever do. Wow? I guess this is the plan.

Boris Gau
Not really measure up to the best ski resort in Canada status. Yes it is the largest but only the top part is skiable most of the time. The bottom part is slush and water (Starbucks frape!) You may say we pick a good part and we start there. True but the top part closes at 2:30. Considering you will be lucky to be at to around 9:30 too expensive for what you get. Given I'm spoiled with Rockies slopes.

Joanna Fields
Amazing if you can get some fresh powder, but be prepared to pay! This is one expensive mountain to hit up. Also, if you are going late in the season, go early as possible as the days are short and the mountain closes early.

Jamal Fiedler
A beautiful place to visit even in the fall! Before ski seasons come check out the Turkey Sale bikes, snow skiing and more. We love it. Annual family tradition.

Where is Whistler Blackcomb located?

The cross-country ski trailhead at Whistler Blackcomb is located at the base of the mountain. To get there, drive to the village of Whistler and follow the signs to the ski resort.

The Whistler Blackcomb resort is located in the town of Whistler, British Columbia. The resort is made up of two mountains, Whistler and Blackcomb, which offer a combined 8,171 acres of terrain, making it one of the largest ski resorts in North America. The resort receives an average of over 1,000 inches of snowfall each year and has some of the best skiing and snowboarding in the world. In addition to skiing and snowboarding, the resort offers a variety of other activities including mountain biking, hiking, and ziplining. The village of Whistler is also a great place to visit, with a variety of restaurants, bars, and shops.

What is the level of difficulty of Whistler Blackcomb ?

What is the elevation of Whistler Blackcomb?

Explore other trails near Whistler Blackcomb 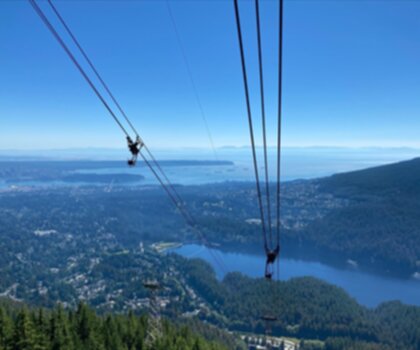