What are the activities at West Coast Trail ?

Why choose a trail at West Coast Trail?

The West Coast Trail follows in the footsteps of Canada's First Nation ancestors.

The West Coast Trail is OPEN May 1 to September 30.

Reservations: Beginning 8:00 am (PST) on January 8, 2018, reservations for the West Coast Trail can be made for any date between May 1 and September 30 through the Parks Canada Reservation Service.

The West Coast Trail is a marquee adventure for the serious hiker.

A mid-point entrance at Nitinaht Narrows (only accessible by water from Nitinaht Village), allows hikers to tackle a shorter portion of the West Coast Trail.

Hikers using the Nitinaht Village Trailhead should plan for the same rigorous and challenging excursion as those hiking the entire length of the West Coast Trail.

the West Coast Trail is on the southwestern coast of Vancouver Island, in British Columbia, Canada.

Neither of the places are large centres by any sense of the word, so actually getting to the West Coast Trail is in itself a bit of a process.

The West Coast Trail was formed out of necessity and the route today is the only route realistically possible along this tangle of rainforest over brutally changing terrain.

Even with all the construction of suspension bridges, cable car crossing and ladders it's brutal.

Winter storms blast down monstrously huge trees and leave them sprawling across the trail.

The West Coast Trail's difficulty can be measured by its relatively short length of 75 kilometres it takes 5-7 days to complete.

The trail's length is misleading as it doesn't take into account the thousands of zig-zags along the route.

It is a jigsaw of a trail, up and down over endless chasms tangled with rainforest.

It just takes a long time to snake through and you quickly discover that 2 kilometres on the map shows as 4.8 kilometres on your gps!

Added to that your pace is bogged down by whole sections of mud, crawling under and over fallen trees, and pausing almost every 5 minutes to soak in a sensational view.

Even the wrecked sections of trail become a thing of wonder and amusement.

On either side of the gap is a chainsawed end of an enormous tree that crashed down on the boardwalk during some winter storm a long time ago.

You would need an army of workers to keep on top of the needed repairs to the West Coast Trail.

It takes a couple days on the West Coast Trail to grasp how wonderful it is.

The treacherous trail in this wet is muddy, slippery and requires your full attention at every step.

A piece of a shipwreck along the beach or a massive anchor left 150 years ago after the ship it came from succumbed to the Graveyard of the Pacific in some calamitous storm that smashed it .

The West Coast Trail, originally called the Dominion Life Saving Trail was built out of necessity because of the enormous number of shipwrecks that gave this stretch of ocean its brutal name, the Graveyard of the Pacific.

The storms are so bad that even today the West Coast Trail is closed from September to May.

Expecting at any moment to see the calm, sheltering waters of Juan de Fuca Strait, only to see the jagged teeth of the Vancouver Island, an instant before they rip into your ship.

Over a century later, you stumble along the beach halfway along the West Coast Trail and nearly trip over one of the anchors the Skagit, left after it disintegrated in 1906.

It is easy to focus on the positive aspects of the West Coast Trail and gloss over the dangers.

Give yourself lots of time, take lots of breaks and be vigilant with every step.

The frequent rainy days bring another risk to hikers if they are not prepared.

Even then you will still get quite wet on rainy days with knee deep mud and sweating from the exertion.

It is hard to have fun on the West Coast Trail if you are soaked to the skin and shivering because you didn't bring the right clothes and footwear.

The trail becomes an endurance test instead of a wonderfully scenic trek through the wilderness.

The cable car crossings are another source of accidents on the West Coast Trail.

A moments distraction could send you over the edge and ending your hike with an emergency helicopter ride.

High tides are another source of danger on the West Coast Trail.

There are plenty of sections of the trail that are not passable during high tides.

Though there are very nice bridges and cable car crossings on the West Coast Trail, there are a few creeks and rivers to hike through.

There are plenty of other less likely dangers on the trail.

Drinking water is easily found all along the trail, though you should always treat, filter or boil it to ensure you don't get sick.

Most of the trail you will see thousands of mussels clinging to the rocks.

Be careful with food you bring as if you don't keep your food well away from your tent in one of the campsite food boxes, you may attract a bear to your tent.

Fortunately food boxes are numerous and convenient to use on the West Coast Trail.

Wolves and cougars also live in the vast wilderness around the West Coast Trail you are not likely to see a wolf and seeing a cougar is extremely rare.

What are the coordinates and address of West Coast Trail?

Where is West Coast Trail located? 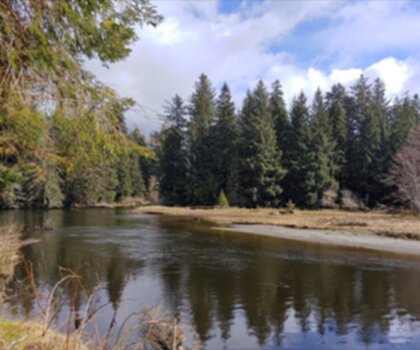